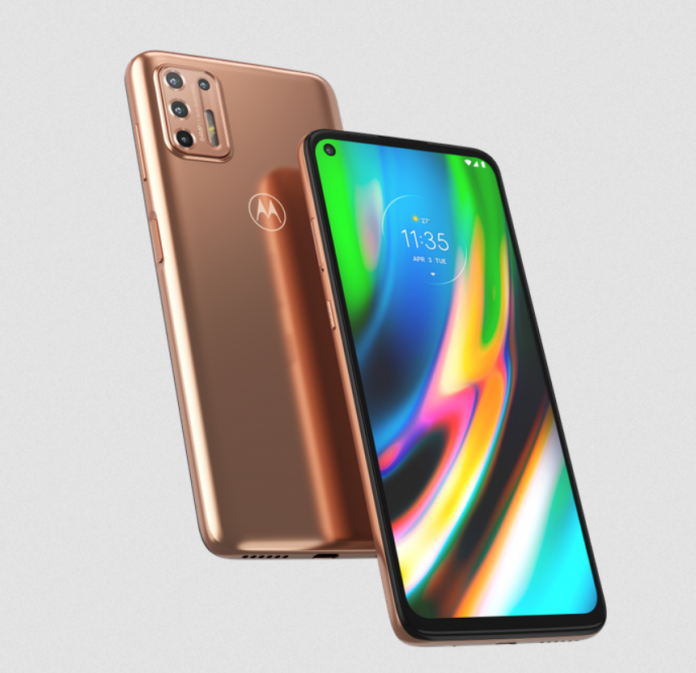 After a couple of major leaks, Motorola finally made the Moto G9 Plus official. It is currently available for buying in Brazil only, and availability in other regions is not confirmed. The Moto G9 Plus is available in two color options: Indigo Blue and Rose Gold, priced at BRL2,499 ($470/€395).

The Moto G9 Plus is powered by the Snapdragon 730G SoC, a mid-range offering by Qualcomm. (The Google Pixel 4a also comes with a Snapdragon 730G processor.) It is equipped with 4GB RAM and 128GB of storage space. The smartphone runs Android 10 and comes with a microSD card slot, allowing storage expansion by up to 512GB.

The Moto G9 Plus is built around a 6.8″ FullHD+ Max Vision display with HDR10 support. The display has a punch hole in the upper-left corner for the 16MP selfie shooter.

Here is a peek at key specifications of the device:

The phone’s reflective back has a huge camera module on the top left, which houses a quad-camera setup: 64MP primary, 8MP ultrawide (118° FOV), 2MP macro, and 2MP depth sensor.

The Moto G9 Plus is the biggest of Motorola’s G9 group, but not by much. The Moto G9 and Moto G9 Play both have 6.5-inch screens, so the difference is insignificant. One of the most significant differences compared to the G9 and G9 Play, however, is the Moto G9 Plus comes with a Snapdragon 730G processor.

The surprising thing here is that Motorola decided to launch the device with only four GB RAM, even at this price point. Considering the near-stock android skin and Motorola’s optimization, it might be enough for an average user. But, users who want to test out heavy apps, 4 GB RAM might not be enough. Also, G6 plus, an almost 3-year-old device, has the same amount of RAM. Snapdragon 730G, coupled with 6 GB of RAM, makes more sense in this price range.

Amar Pawar - July 22, 2018 0
If you like watching people play games, you’ll undoubtedly be familiar with the gaming streaming hub Twitch, which boasts more than 15 million active...