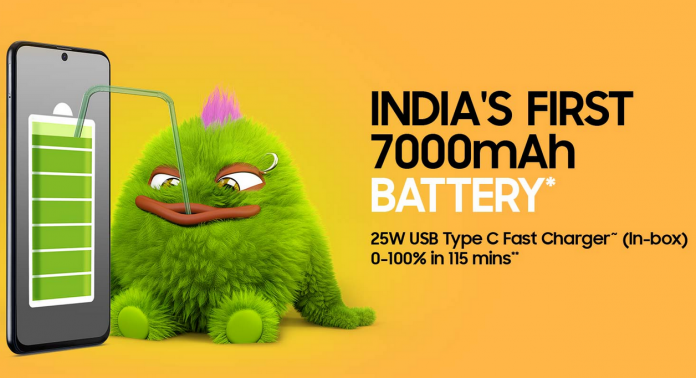 It is available in Electric Blue and Celestial Black color, and you can buy it starting September 18 from Amazon India and Samsung’s regional online store.

Galaxy M51 is the most-premium smartphone among the Galaxy M-series. Samsung is rigorously advertising the Galaxy M51’s mammoth 7,000 mAh battery. The other key features include a 64MP quad-camera setup and a Snapdragon 730G processor.

It’s built around a 6.7″ Infinity-O Super AMOLED Plus display having FullHD+ resolution, that has a punch hole in the middle for the 32MP front-facing camera. The Galaxy M51 runs Android 10 out of the box. The quad-camera setup at the back includes a 64MP Sony IMX682 primary camera accompanied by a 12MP ultrawide (123° FOV), 5MP depth sensor, and 5MP macro modules.

The rest of the highlights of the Galaxy M51 include a side-mounted fingerprint sensor, USB-C port, 3.5mm headphone jack(which has slowly become a feature over time), a dedicated microSD card slot (up to 512GB), and Dolby Atmos audio enhancements.

The entire package’s highlight is a huge 7,000 mAh battery, which the company claims can go from 0 to 100% in just 115 minutes with the bundled 25W quick charger. And there’s the option of reverse wired charging as well, meaning you can use the Galaxy M51 to juice up other devices with the Type-C to Type-C wire that comes in the box.

Amar Pawar - September 8, 2020 0
It has long been rumoured that Microsoft will introduce two Xbox consoles this year, trying to command both ends of the market....